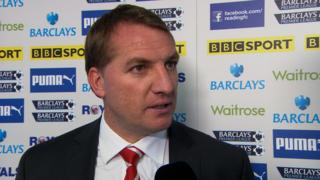 Manager Brendan Rodgers says Liverpool were not "clinical" enough in front of goal after Reading held them to a goalless draw at the Madejski Stadium.

Liverpool had 26 shots on goal and 15 on target, but Reading goalkeeper Alex McCarthy produced a man-of-the-match display to deny them the win.

The stalemate means it is the first time in 14 months that Liverpool have failed to score in consecutive matches.