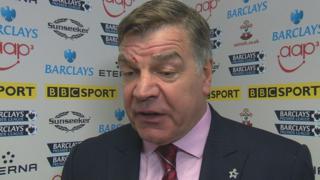 West Ham boss Sam Allardyce says the club is "virtually" safe from Premier League relegation after their 1-1 draw at Southampton.

The Hammers went behind to a Gaston Ramirez strike before Andy Carroll levelled the match midway through the second half.

The result leaves West Ham 12th in the table, level on 38 points with 11th-placed Southampton.