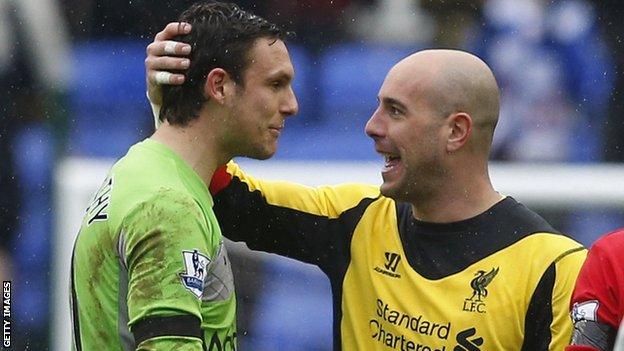 Brendan Rodgers described Reading goalkeeper Alex McCarthy's performance as "absolutely staggering" after Liverpool were held to a goalless draw at the Madejski Stadium.

The 23-year-old made a succession of world-class saves to deny Luis Suarez, Steven Gerrard and Philippe Coutinho.

Rodgers said: "Sometimes you have days where the keeper makes one or two good saves, but we had 14 shots on target.

"I can see him playing for England, there's no question about that."

Having been out for five months while recovering from shoulder surgery, this was McCarthy's first appearance since 4 November and it came only after Adam Federici was ruled out with an ankle injury.

"I know Alex well. He's genuinely going to be a top, top keeper and to perform like that having been out for so long was absolutely staggering," Rodgers added.

Rodgers worked with McCarthy during his six-month spell as Reading manager in 2009 and tipped the academy product to go to the top of the game. "Reading has always produced very good goalkeepers so he was down the pecking order at the time," he said.

All the headlines tomorrow will be about Alex McCarthy

"He has all the qualities to be a top, top keeper - he's 6'5", makes good saves, is good on his feet and is very calm and assured despite being very young. In terms of England it will be hard because Joe Hart is one of the top five keepers in world football, so it will be very difficult for him because Joe is still very young.

"But there's no doubt he's a top talent. He'll be getting games here at Reading and hopefully he'll become the number one at Reading."

Liverpool keeper Pepe Reina made fine saves of his own when Noel Hunt and Jobi McAnuff threatened to score, but Reading manager Nigel Adkins insisted the afternoon belonged to McCarthy.

"He's put in a fantastic display," Adkins said. "We have some exceptional keepers and a really good goalkeeping coach.

"I'm really pleased with the players, their attitude and application. We've kept a clean sheet and it's fair to say Alex has pulled off some world-class saves.

"Alex will receive the headlines but I'm pleased with all the players today."