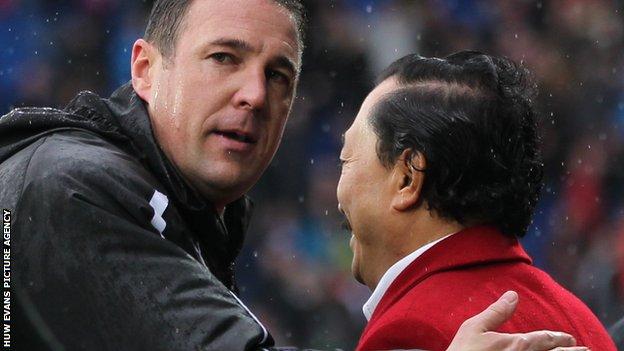 Cardiff boss Malky Mackay says his promotion-chasing side will approach Tuesday's Championship match against Charlton Athletic like any other game.

A point against a side bidding for the play-offs would secure promotion to the Premier League.

But Mackay is not underestimating a side who beat Cardiff 5-4 in November and thrashed Barnsley 6-0 on Saturday.

"We'll go out and apply ourselves just like we have the rest of the season," he said.

"There's a structure and a process to the way I plan our games and we'll do the exact same thing on Tuesday night.

"I suppose it's going to be quite special in terms of there won't be a ticket to be had.

"The atmosphere here on Tuesday night will be fantastic [but] we've got a game to play and we've got Charlton who will be a tough game for us."

Charlton lie ninth, six points behind sixth-placed Bolton with Leicester and Nottingham Forest above them, and the game against the Bluebirds is one of four remaining fixtures for the Londoners.

Mackay added: "Charlton was probably one of our worst performances of the season in terms of the game down at The Valley.

"I know Chris [Powell, Charlton manager] really well so it's going to be a tough game for us on Tuesday night."

Cardiff edged to within a point of promotion to the top flight with a convincing 3-0 victory over Nottingham Forest.

Heidar Helguson's header set Cardiff on their way before the striker was involved in the incident which saw Forest's Darius Henderson shown a red card.

Iceland international Helguson was replaced at the interval by Rudy Gestede, whose two headed goals sealed a comfortable win.

And Mackay praised French-born Benin international Gestede, who has often found himself a bit-part player in his two years with the club.

"Rudy's got a really good games-to goals-ratio and he's someone I've got a lot of trust in," Mackay added.

"He is someone we have nurtured for two years. I loved his attitude when he arrived here - he wanted to throw himself into everything.