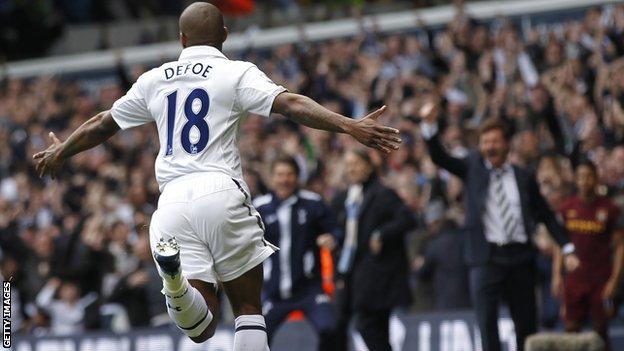 "Three goals in six minutes and 20 seconds mean it looks like 'game on' for Tottenham Hotspur and the Champions League.

"But the dramatic comeback means it is 'game over' for Manchester City and the Premier League title."

Gareth Bale, returning from injury, dinked a third as Spurs moved to within a point of fourth-placed Chelsea.

Roberto Mancini's defending champions are 13 points adrift of their cross-city rivals with five games left to play for both sides.

Yet for the majority of the match it seemed as though City would clinch a routine win and keep their slim hopes of retaining the title alive after Nasri steered in James Milner's pullback.

Tottenham went into the match on the back of a 10-day break following their Europa League exit at Basel but they produced a lethargic display until bursting into life after Dempsey's equaliser.

Up to that point, City's assurance in possession, coupled with their willingness to drive forward on the counter-attack, served to frustrate the majority inside a subdued White Hart Lane.

The visitors spurned several chances to double their lead as Nasri poked wide from Carlos Tevez's ingenious flick and Spurs keeper Hugo Lloris stopped the Argentine striker's header with an instinctive one-handed save.

But Dempsey, clearly on-side despite the protest of the City defence, pounced at the far post to convert Bale's outside-of-the-boot cross and punish their profligacy.

Suddenly, the home crowd found their voices and the players found their belief as they upped the tempo in search of the lead.

It came four minutes later when substitute Defoe, who had only just entered the action as a replacement for the ineffective Emmanuel Adebayor, cut inside City skipper Vincent Kompany before unleashing a unstoppable angled drive past Hart.

Tottenham talisman Gareth Bale has been involved in 12 goals in his last nine Premier League appearances. The Welshman has scored nine times and provided three assists.

Spurs looked a completely different team as their energy levels rose, in contrast to a City team who started to look like they were feeling the effects, both mentally and physically, of a hectic week.

The Blues enjoyed the high of reaching the FA Cup final by beating last-four opponents Chelsea at Wembley on Sunday, before grinding out a 1-0 Premier League win against Wigan on Wednesday.

Spurs talisman Bale, who has missed two games with ankle ligament damage, was almost anonymous in the opening 75 minutes before he followed up his assist for the equaliser by scoring the third.

The Welshman latched on to a piercing throughball from another Spurs substitute, Tom Huddlestone, and managed to hold off Gael Clichy to coolly clip over the head of Hart.

But Spurs have a game in hand on the Gunners, meaning a place in Europe's premier club competition remains in their hands as they enter the final month of the season.

"In the second half everything changed and we played with more confidence. We found more spaces and we found the back of the net, deservedly.

"Gareth [Bale] gave us the green light - he was fully prepared. Physically he's a monster and played 90 minutes, a great, great performance. Credit to him."