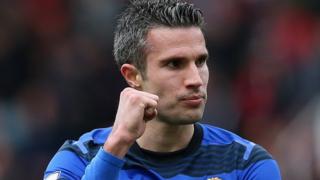 Manchester United striker Robin van Persie says he is "relieved and happy" to score his first goal in over two months to help his team win 2-0 at Stoke.

Van Persie's second-half penalty, which ended a run of 10 games without a goal, made the points secure after Michael Carrick had given the visitors an early lead.

The win means United need seven points to regain the Premier League title and they could achieve that feat at Van Persie's old club Arsenal on 28 April - but the Dutchman says beating the Premier League points record is now their main focus.