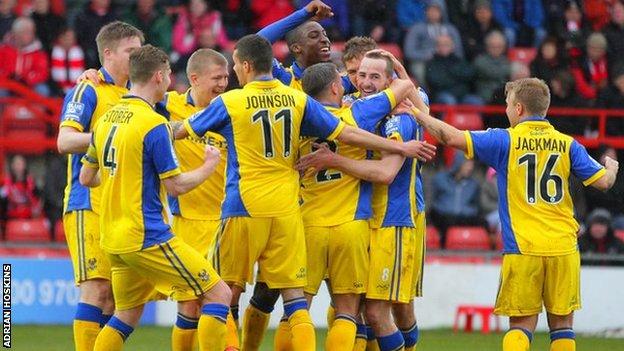 A second straight Mansfield away defeat would leave the Harriers' destiny in their own hands going into Saturday's home game with Stockport County.

Harriers midfielder James Vincent told BBC Sport: "I'm sure we'll all have an eye on Hereford.

"They're a good side. We hope they get a result for us."

The Stags surprisingly surrendered a 1-0 lead with half an hour left, to lose 2-1 at Braintree on Saturday.

Harriers took full advantage with goals from Vincent and Michael Gash to win 2-1 at Wrexham to go back top again.

Steve Burr's side are now a point clear with one game left, but this Saturday's finale, when all 12 Conference top-flight games kick-off at 17:15 BST, hinges on the result of Mansfield's game in hand.

If the Bulls beat them, it will put Harriers in the box seat.

If Kidderminster then beat Stockport at Aggborough this Saturday, the Worcestershire side will be champions and automatically promoted back to the Football League.

If it is a draw at Edgar Street, it will leave Mansfield and Kidderminster level both on points and goal difference. But the Stags would return to the top as they have scored more goals, 89, to the Harriers' 78.

But, if Mansfield win, they would go two points clear again and would win the title if they beat Wrexham at home this Saturday.

That would mean Harriers having to settle for the play-offs, but assistant manager Gary Whild told BBC Hereford & Worcester: "If we'd been told 10 games into the season we'd be going into a final-day shoot-out, we'd have taken it.

"You couldn't ask for a better end to the season. It's all eyes on Tuesday now.

"But, whatever happens, it will go the last game and we just have to try to maintain our form individually and collectively."