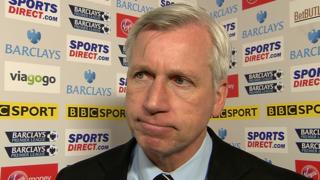 Newcastle United manager Alan Pardew says he is "disappointed" with their disallowed goal in the 3-0 Premier League loss to Sunderland.

In the second half, with Sunderland 1-0 up, the Magpies's Papiss Cisse had a goal ruled out for offside but replays later showed the decision to be wrong.

It is Newcastle's third loss in four league games and they remain just five points clear of the relegation zone with goalkeeper Tim Krul out for the rest of the season after dislocating his shoulder.