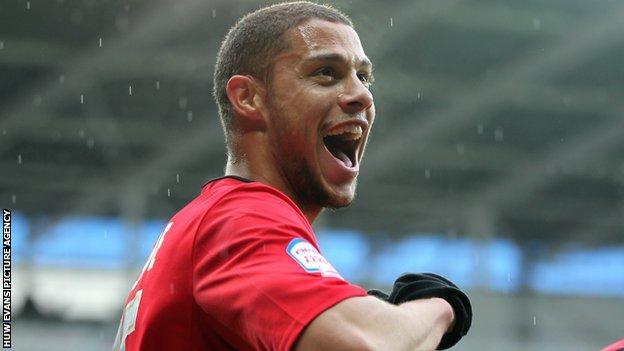 Rudy Gestede says Cardiff City must focus on all their remaining games even if they secure promotion to the Premier League against Charlton on Tuesday.

The Bluebirds need a point to secure promotion after Saturday's 3-0 victory over Nottingham Forest.

Substitute striker Gestede scored twice against Forest and said: "Even if we get one point we need to be focused for the rest of the season."

Manager Malky Mackay has said his side will approach Charlton

And Chris Powell's side are also in the hunt for promotion via the play-offs.

They lie ninth, six points behind sixth-placed Bolton with Leicester and Nottingham Forest above them, and the game against the Bluebirds is one of four remaining fixtures for the Londoners.

After the Addicks, Cardiff travel to Burnley on Saturday, 20 April, host Bolton Wanderers seven days later and finish their season on 4 May at Hull.

Before those tasks, Gestede has a double aim on Tuesday - promotion to the top flight and revenge for that November setback.

"We lost the first leg against Charlton so now we want revenge and if we get… points it will be a good party with the fans," he said.

Gestede expects an even better atmosphere to greet Charlton than Cardiff City have enjoyed at home this season.

"We've got already a good atmosphere here every game so I think Tuesday's going to be amazing," said the French-born, Benin international.

And having scored five goals in 23 Cardiff appearances - 21 as a replacement - Gestede also hopes his brace against Forest can be the springboard to reaching double figures.

"The gaffer asked me to come on the pitch and I was ready so I did my job and scored twice [so] I'm very happy.

"If I make double figures I'll be very happy."