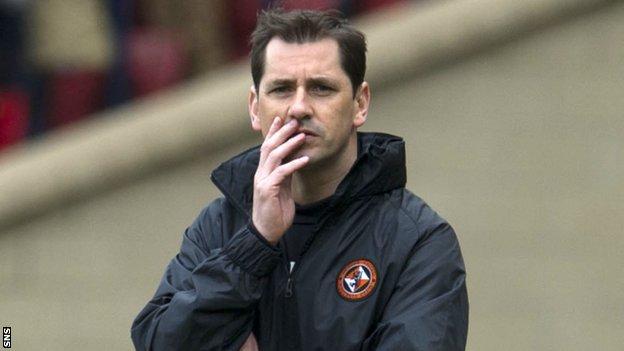 Dundee United manager Jackie McNamara has said he would trade the goals of Sunday's thrilling Scottish Cup semi-final for a place in the final.

the same scoreline as the first semi-final between winners Hibernian and Falkirk, on Saturday.

However, McNamara admitted he would rather have bored fans and progressed.

"I would rather have been in the final and it be a poor game," the United boss told BBC Radio Scotland.

However, McNamara praised the way his side had played, insisting they had caused Celtic problems.

"I thought the players gave absolutely everything , the young kids coming in and the older ones helping them," said the former Celtic captain.

"I knew if we got the ball we could pass it and we could cause them problems. I thought we did that a number of times.

"You can see that they're hanging on and [Celtic manager Neil] Lennon's telling them to keep it in the corner.

"That tells me all I need to know about my side's performance."

McNamara believes his players only have minor improvements to make in order to push on to the next level.

"I've got mixed emotions," he explained. "Obviously disappointment, to lose the tie. I'm also proud of the way they played the game.

"We've just little things we need to work on - concentration when we score a goal - but that's my job, to make sure we can improve on that."

The performances of teenagers Johnnie Souttar and Ryan Gauld in their first Hampden appearance drew praise from the Tannadice manager.

"Gauld's vision, his weight of pass; he's just fantastic to watch, and young Souttar at the back, to handle the physical side of the game for 120 minutes against the champions."