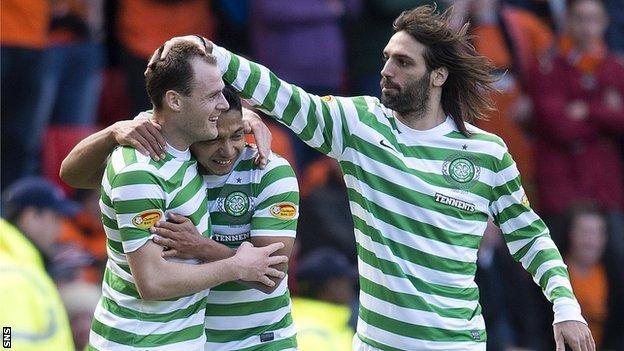 And Lennon felt the seven-goal thriller belied criticism of the Scottish game.

"It was brilliant and both teams covered themselves in glory," Lennon told BBC Radio Scotland.

"What's the problem? It's not caused by clubs like Dundee United or ourselves, it's people on the outside wanting to batter the game all the time."

"It's great to talk about the football," said Lennon. "Everyone wants to talk about all the other problems but we don't create them. There's a lot of good people who want to do things right for the game.

"People say the quality of football isn't great. I go down the road and watch English games and there's far better players playing here, trust me.

"[Ryan] Gauld looks a talent, [Gary] Mackay-Steven's a talent, [John] Souttar played very well, I like [Stuart] Armstrong. So, Dundee United have got a rich vein of players coming through, as have we.

"I've got a player in James Forrest who could go on to be one of the Scottish greats. He was unbelievable today, considering he hadn't kicked a ball for a month."

Celtic remain on course to win a Scottish Premier League and Scottish Cup double, with one more point required to clinch the championship and Hibernian the opponents in May's showpiece final.

"I'm really proud of this group of players," added Lennon. "They've had a long hard season, been at the sharp end of everything and they deserve to be in the cup final. That's the least they deserve out of the season.

"We're hopefully going to get over the line in the title, we've had a brilliant run in Europe and now we're in another cup final.

"I have no criticism of the team, nothing but praise and glory for them.

"We can really kick back and enjoy the next few weeks. It's been a pivotal season, a monumental season in a lot of ways for the club.

"What I will do is give some players time off between now and the cup final because we'll need to give them some rest."