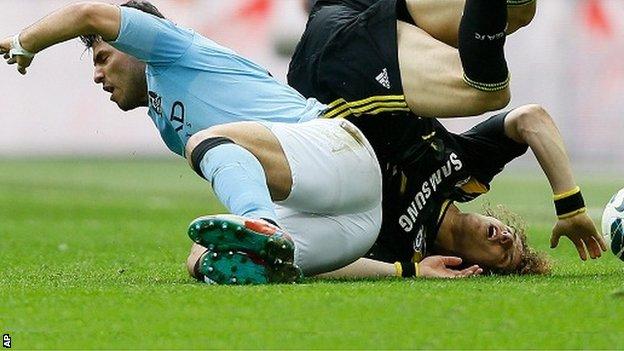 Aguero scored what proved to be the winning goal in but only a free-kick was given for his two-footed tackle on Luiz nine minutes from time.

"Aguero's a great player, he needs to be honest with himself and say, 'I don't like to do bad tackles'," said Luiz. "It was five seconds of anger and I forgive him."

Chelsea's FA Cup semi-final against Manchester City was their sixth game in 16 days. It was also their 59th match of the season.

City opened the scoring at Wembley through a close-range effort by midfielder Samir Nasri on 35 minutes.

Aguero then followed up his on Monday by heading home after half-time to double the lead.

Demba Ba produced an acrobatic finish to haul Chelsea back into contention.

But Aguero caught Luiz with the two-footed challenge, while referee Chris Foy denied Fernando Torres a penalty when City captain Vincent Kompany pulled his shirt as he raced into the 18-yard area.

"Many kids see the game, watch the game and they want to see good things and not bad things," added Luiz.

"I didn't see it because I was on my back but I felt it a little bit. Sometimes in a game people have five seconds when they are angry and do things they don't like to do. I think it was that."

"Nothing is decided. In 90 minutes anything can happen," said the Italian.

"Wigan play good football and if we want to beat them and win the FA Cup we will have to play a very good game and prepare well."