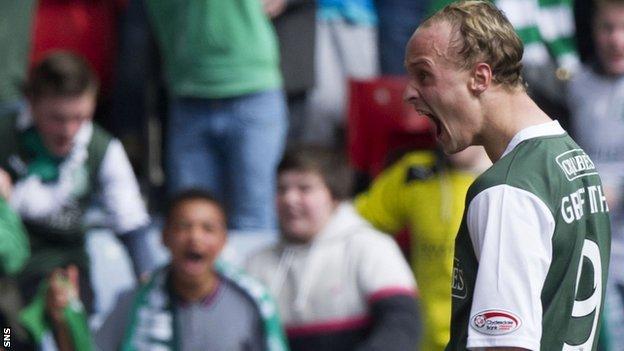 Hibernian overcame Falkirk to reach the Scottish Cup final on Saturday but did it the hard way.

It was an incredible spectacle at Hampden Park, but was it football's greatest comeback? Let's examine some other leading contenders.

In a match so dramatic that a half-time team talk ended up being turned into a film, Liverpool overturned a seemingly impregnable AC Milan lead to claim the Champions League trophy.

Milan took the lead in the first minute through captain Paolo Maldini before a Hernan Crespo double put the Italians into what seemed an unassailable lead.

Steven Gerrard scored in the 54th minute before Vladimir Smicer further reduced the deficit a minute later and, on the hour mark, Xabi Alonso levelled the tie.

With no more scoring, the final went through extra-time and to a penalty shoot-out.

Andriy Shevchenko took the crucial penalty and, despite Dudek diving the wrong way, the Pole parried the effort with his left hand to win the final.

The result meant that Liverpool had won the competition for a fifth time, entitling them to keep the trophy.

Craig Brown's Motherwell side came back from 6-2 down with 25 minutes left on the clock to claim a point in the most incredible match in Scottish Premier League history.

A Colin Nish hat-trick, a double form Anthony Stokes and a strike from Derek Riordan had John Hughes' side on easy street.

Goals from Giles Coke and John Sutton either side of half-time seemed destined only to put a more respectable gloss on the scoreline for Well.

But, only two minutes after Nish had grabbed Hibs' sixth, Cole fired in a rebound from close range to give the home side a glimmer of hope.

A free-kick from Tom Hateley and a second for Sutton led to the deficit being slashed to a single goal and then, with five minutes remaining, Motherwell were awarded a penalty.

However, Hibs goalkeeper Graeme Smith guessed right to deny Lukas Jutkiewicz and it seemed the comeback had gone.

But, in stoppage time, Jutkiewicz got his revenge, lashing a volley into the net to claim an incredible draw.

A shell-shocked Arsenal found themselves 4-0 down after 35 minutes but somehow turned a 12-goal thriller on its head to reach the last eight of the English League Cup.

The comeback began when Theo Walcott netted on the stroke of half-time to give Arsene Wenger some hope as he looked to inspire his players.

Olivier Giroud grabbed a second for the Gunners before Laurent Koscielny made amends for a first-half own goal to reduce the deficit to one in the 89th minute.

Marouane Chamakh scored to put Arsenal ahead for the first time in the match before Pavel Pogrebnyak pulled the Royals level.

But, in the last minute of extra-time, first Walcott, then Chamakh, stunned Reading with goals that destroyed their Cup dream.

Four goals down with half-an-hour left to play against the might of a German side with a 100% record in World Cup qualifying, few gave Sweden any chance of rescuing anything in Berlin.

But you can never write off a team with the mercurial talent of Zlatan Ibrahimovic - and rescue a draw they did.

A Miroslav Klose brace had been added to by Per Mertesacker and Mesut Ozil and the majority of the crowd in the Olympiastadion were looking forward to seeing out the remaining 30 minutes, but the Swedes had other ideas.

Ibrahimovic took advantage with a powerful header as the hosts slipped down a gear and, two minutes later, Celtic's Mikael Lustig reduced the Swedish deficit to two.

The Germans could not up the tempo again and Johan Elmander brought the visitors to within a goal on 76 minutes.

It still looked as though the hosts would hang on to claim the win, but, in the third minute of stoppage time, Rasmus Elm popped up to volley past Manuel Neuer and claim an incredible draw.