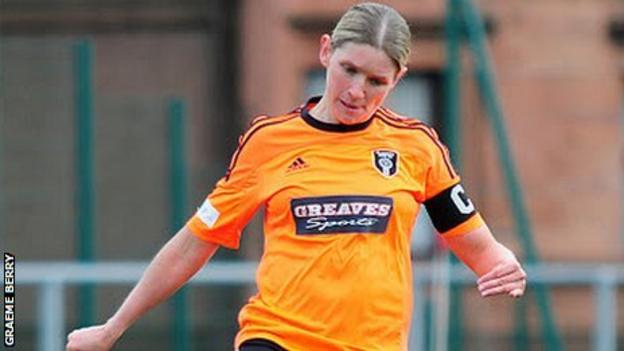 Glasgow City and Hibernian maintained their winning form in the Scottish Women's Premier League with respective wins against Aberdeen and Celtic.

Hibs won 3-2, despite having Joelle Murray sent off, while City had five different scorers in a 5-1 triumph.

Elsewhere, Rangers gained a 5-2 victory over Hamilton and in doing so inflicted on Accies their first defeat in almost 10 months.

However, they were unable to add to their advantage following a disappointing second half and Aberdeen hit back through a penalty of their own with seconds remaining, Nikki Wright converting.

"First and foremost we got three points which is our aim at the start of every game," he said of Glasgow's fourth win from as many matches.

"That aside, it was nowhere near the level we expect from ourselves. There is an expectation at this club and I think everyone in the dressing room would agree we didn't meet that expectation with today's performance.

"The conditions were not ideal, but that is no excuse. We need to improve for what will be a tough game against Celtic next week in the Cup."

Hibs, who have won three out of three, roared into a 3-0 half-time lead with goals from Susan Fairlie, Caroline Weir and Siobhan Hunter.

Midfielder Murray was shown a straight red for a two-footed challenge straight after the break and Heather Richards pulled a goal back for Celtic before Chloe Craig added a spot-kick for the hosts.

Accies battled back from two goals down to restore parity against Rangers but the home side re-asserted themselves with three further goals.

A hat-trick from Katie Reilly contributed to a much-needed victory for Spartans, their first points of the new season.

Aimee Godfrey and Caroline Heron each scored a brace in Forfar Farmington's win.