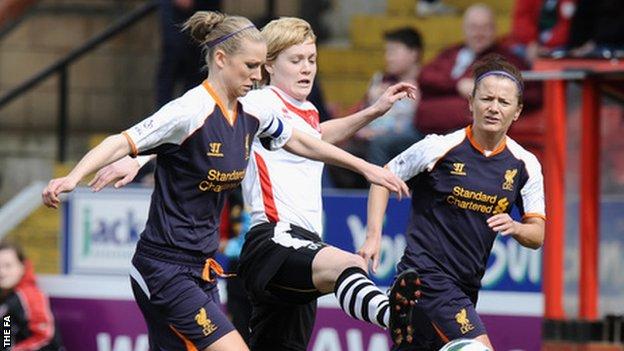 Striker Natasha Dowie was on target as Liverpool kicked off the Women's Super League season with a 1-0 win at Lincoln.

In a delayed FA Cup quarter-final the 2010 winners Everton, who had Nikita Parris sent off, lost 3-2 at Bristol Academy.

They will now face Lincoln in the semi-final on 28 April.

Dowie headed Liverpool into the lead from a seventh minute cross by midfielder Fara Williams.

And Dowie almost doubled her tally with a 32nd minute shot that bounced back off the post.

Lincoln fought back in the second half but, despite a couple of good efforts by striker Carla Cantrell, they were unable to force an equaliser.

Chelsea went in front through striker Sofia Jakobsson in the 16th minute.

But they were pegged back 12 minutes later, Williams drilling a tremendous 25-yard shot into the net.

Either side could have gone on to win the game but Williams wasted the best opening, shooting over the bar from close range 13 minutes from time.

In an end-to-end contest that followed left winger Toni Duggan cut inside to equalise in the 32nd minute.

But Natalia, with a neat chip over goalkeeper Rachel Brown, restored Academy's lead six minutes into the second half.

Everton seemed to be finished when Parris was sent off for arguing with the referee.

Duggan grabbed her second goal 14 minutes from time, however, and Bristol were thankful to hear the final whistle.