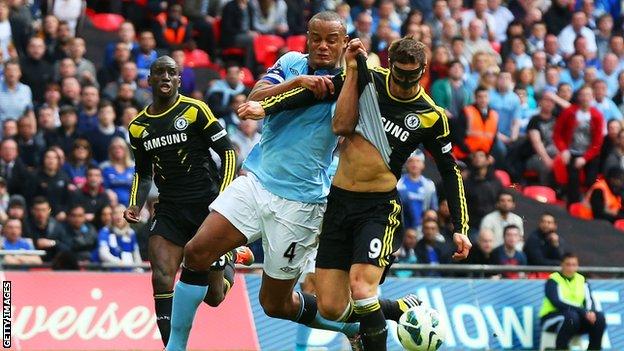 "It was definitely a penalty. Fernando Torres' shirt was above his shoulders, it was so obvious that it was a penalty for Chelsea."

City will now meet Wigan Athletic in the final in May and Benitez said: "It was a clear penalty not given.

"It could have been a red for Kompany and could have made a big difference."

"I don't like to point at players," said Benitez. "The main one for me is the penalty that was not given. This was important.

Chelsea's FA Cup semi-final against Manchester City was their sixth game in 16 days. It was also their 59th match of the season.

Benitez admitted Chelsea paid for a sluggish start that saw impressive City go into a two-goal lead courtesy of Samir Nasri and Aguero before Demba Ba's brilliant finish set up a frantic finale.

He insisted their hectic recent schedule had not caught up with them, saying: "Not really because you can't explain how we finished so strongly.

"You have to give credit to Manchester City. They are a strong team physically and technically who have players at the back, in the middle and up front who can make a difference.

"We have to give credit to them but those decisions could make a big difference. I said before this game we wanted to go through in two cup competitions and finish in the top three or four in the league.

"Now it is exactly the same but in one cup competition.

"Our game against Fulham this week will be massive and we know we have to be physically and mentally ready."