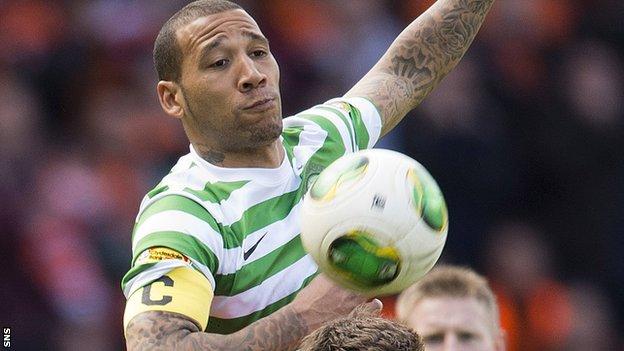 Stand-in Kelvin Wilson is ready to allow Scott Brown to lift the Scottish Cup even if the captain misses the final for Celtic against Hibernian.

Wilson skippered the side to in the Scotland midfielder's absence.

"I would leave that to Brownie," said Wilson when asked who would do the honours if Celtic beat Hibs.

"He's the best captain I've played under, so I won't take that away from Brownie at all, even if he's not fit."

Not that Wilson is taking anything for granted against Hibs on 26 May, given the scare the runaway Scottish Premier League leaders were given by United.

"They were outstanding," he said of Celtic's semi-final opponents.

"It is a cup game, it is a one-off and, although they are in the top six, that's really their season that was."

Victory after extra-time ended a run of three straight defeats for Celtic at the national stadium.

"Obviously it comes to mind what happened in the past," admitted Wilson.

"But, with the players that we've got, we are always going to score.

"It is just, at the other end, we are conceding goals and I can't put my finger on why."

Despite those concerns about his side's own form in defence, Wilson thinks Celtic will be worthy league champions should scores go their way this coming weekend.

"We won the game and that's all that matters," he said.

"We can win the league next week and have got to the Cup final, so I think we deserve at least a double."

Wilson revealed Victor Wanyama and substitute Beram Kayal had not realised the yellow cards they picked up against United would mean missing the final through suspension.

And Joe Ledley admitted he did not know who he would be playing beside in the centre of the Hampden pitch come the final.

"With Brownie out as well, it will be difficult," said the Wales international.

"It's disappointing to lose those two as Victor has been especially key to how we play this season, but it gives an opportunity for someone to come in and do well."

Ledley agreed with Wilson that an early start to the season because of Champions League qualifiers had left himself and other players physically drained.

"We've played a lot of games this season, but we dug in and I think our fitness came through in the end," he said.

"It was a scrappy game and we need to be playing much better than that and defend well as a team - not just the back four.

"But, credit to Dundee United, they've come out fighting, they've got nothing to lose and didn't give up and it was a good battle for us."

Ledley was hopeful that manager Neil Lennon might give some first-team players a rest ahead of the cup final should the title be secured at the weekend.

However, he added: "We're a hungry group of players and want to take the game to Hibs in the final."