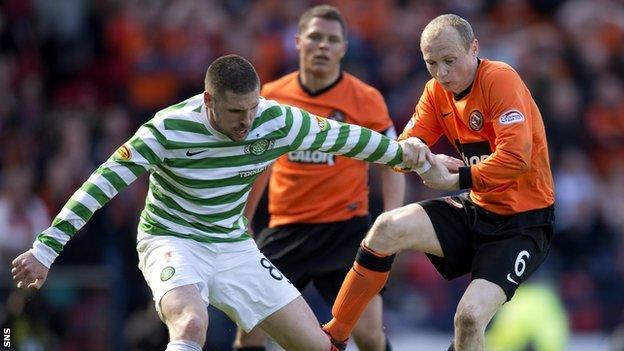 Dundee United players cited the woodwork more than a denied penalty as the difference between victory and defeat against Celtic at Hampden.

But Jon Daly headed against a Celtic post at 3-3 in extra-time.

Midfielder Willo Flood said: "I think if that one drops in, we go on to win the game."

The former Celtic player thought United did not deserve to lose.

"I'm sure they will be relieved as well because we had them on the back foot," said Flood.

"It wasn't to be, but I thought the lads were outstanding, especially the young lads, and it was a great experience for them as well."

Mackay-Steven, who cancelled out Celtic's early opener and was described by Flood as "outstanding", was challenged by Victor Wanyama inside the penalty box shortly before Daly put United 2-1 ahead.

"I asked the ref what happened there and he said it was a collision that was accidental, he did not mean it, but every foul is accidental," Flood said.

Mackay-Steven also thought the referee got it wrong.

"I felt contact on my back, but it was just one of those things," said the winger.

"It was a great game for the fans but obviously a sickener for us losing it in extra-time.

"We kept coming back at them, scoring goals, but it was just unfortunate that they got the goal in extra-time.

"It wasn't to be. They scored a great last goal to win it and it was unlucky for us. We've given everything.

"I think Celtic were good as well. It could have gone either way and unfortunately it didn't go our way."

"To go 1-0 down after a couple of minutes was extremely disappointing, but we showed some great spirit to fight back," he added.

"I thought we were never defeated and went right to the death."