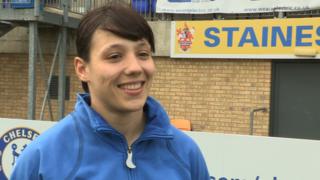 Birmingham City Ladies striker Rachel Williams talks about her spectacular 25-yard strike which earned a point for her team at Chelsea on the opening weekend of the Women's Super League season.

Williams missed a much easier chance from close range late in the game and says she "would rather score the tap-ins to win the game than score the wonder ones".

The 25-year-old adds that the team were pleased with a point after their "devastating" 6-0 defeat against Arsenal in the FA Cup earlier in the week.