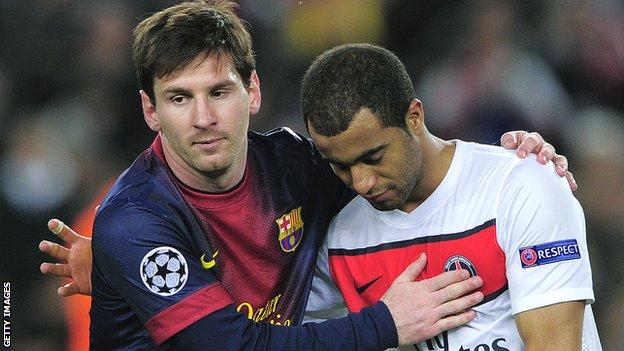 Last Wednesday was another landmark in the extraordinary career of Lionel Messi.

A criticism of him - and it seemed a fair one - was that he could only operate at his best in the comfort zone of a ready-made structure. Take that away and he was unable to bend a game to his will in the manner of Diego Maradona.

Things were looking difficult enough on Wednesday when Paris Saint-Germain took the lead in the Champions League quarter-final second leg. With the pace on the break of Ezequiel Lavezzi and Lucas Moura, the imperious Zlatan Ibrahimovic with a point to prove, and the aerial threat of a set-piece goal, the French side looked favourites for a semi-final place.

During the course of the last World Cup, Maradona was unable to resist an urge to be loyal to Carlos Tevez. He ended up unbalancing his side and harming Messi's role within it

For all the excellence of Barcelona's collective play, Messi's capacity to take three opponents out of the game was badly missed. But could the half-fit hero haul himself off the bench and rise to the occasion?

The answer, of course, was an emphatic yes. His introduction gave the team a lift and his reduced-space genius quickly carved out the vital goal. Producing something like that under pressure and short of top condition leads to one clear conclusion: Messi has become a leader.

It is a role many thought he was not cut out for - his former international team-mate Roberto Abbondanzieri, for example. Just over four years ago, Argentina's 2006 World Cup goalkeeper doubted Messi could lead a group of players: "He doesn't talk. He's so quiet."

In part, Abbondanzieri's view reflects a generation gap which is visible all over the planet. Gareth Southgate reflected on behavioural changes of England players during his long international career.

Of the 2002 World Cup, he wrote: "It is generally the older players who are to be found sitting round the dinner table relating stories from times gone by and trading the latest gossip from each other's clubs. The younger guys tend to disappear to their rooms."

Abbondanzieri and Southgate grew up in an age where there was nothing virtual about social interaction - it was eyeball to eyeball. Younger players - younger people - are different, taking in their stride the more atomising effects of technological development. Messi, then, is a Maradona of the games console generation: less vocal, more introverted.

Just as the debate about Messi's capacity to lead has a global aspect, it also takes on a specifically South American flavour. Because for Argentina - and perhaps even more so for Brazil - there is a very specific and traditional character profile for the role of captain.

Think of Daniel Passarella of Argentina, or Dunga of Brazil. Neither are particularly tall but both seemed to grow with the responsibility of the armband, becoming larger than life figures, bristling will to win with every stomping stride. Both, especially Passarella, could really play but they were also prepared to be as hard as necessary to get the result. Hard on their opponents and their own team-mates, ready to bawl out anyone falling short of the required standard. Bobby Moore, for example, might not have been captain of Brazil or Argentina. Jack Charlton might have had more of a chance.

This is not hard to explain. Firstly, these are societies with an authoritarian touch, where the loudest voice often wins the dispute. Also, the fabulous production line of footballers means that their best teams have frequently been a collection of wonderfully talented individuals. A sergeant-major figure on the field was seen as necessary to keep everyone working inside the collective structure.

So Argentina coach Alejandro Sabella broke the mould back in 2011 when he made Messi his captain. The previous owner of the armband, ordained by Maradona himself, was Javier Mascherano, a much more traditional option. Indeed, in the fire and brimstone of his commitment to the cause, Mascherano was so much in awe of the role that he was initially not sure he was worthy, and had to be talked into it by Maradona. When Messi's turn came, he accepted the armband in his usual undemonstrative manner - and his appointment already looks like something of a masterstroke.

Under Sabella, Messi has well and truly buried a previous hoodoo - that he was unable to reproduce his club form for his country. He has scored eight goals in 11 World Cup qualifiers, and another seven in as many friendlies. The team is built around him.

During the course of the last World Cup, Maradona was unable to resist an urge to be loyal to Carlos Tevez. He ended up unbalancing his own side and harming Messi's role within it.

There is no chance of a repetition. He has imposed himself totally on the team's attacking structure. Everything is now set up for Messi as he goes in search of burying the last remaining hoodoo - winning a major title for his country.

It is a responsibility that he seems comfortable with. He appears to have grown into the burden of leading his team, whether it be club or country. It is a role he can fill without shouting himself hoarse. Lionel Messi talks with his feet.

What happened to the Brazilian goalkeeper Marcos? I remember him being brilliant for Brazil in the 2002 World Cup but didn't see much of him after that - Umar Ahmed

There is only one reason that he didn't move to Europe. He was more than good enough but didn't want to go. He could have joined Arsenal, but came to the conclusion that living abroad was not for him.

He was also very attached to Palmeiras. He was a one-club man, sticking with them when they went down to the second division. He retired a couple of years ago, after a career that, especially in the later stages, was frequently interrupted by injuries.

Abel Aguilar has been on the Colombia team for years, and was the captain for the Under-17 and Under-20 sides, but I'm not sure why. What does he bring to the team that Colombia's coaches believe to be so invaluable? I think we have a better midfield option in Fredy Guarin - Jose Luis Hernandez

Aguilar is a good all-rounder, a sound choice alongside the specialist midfield marker (Valencia or Sanchez). He can mark, reads the game well and knits the side together with his passing. Guarin has more talent but is the kind of player who runs more than thinks. I don't really think they're in direct competition.

One of coach Jose Pekerman's best moves since he took over has been to leave Guarin on the bench and bring in Macnelly Torres, who can undress a defence with the subtlety of his passing. Since Torres and James Rodriguez have been firing together, plus the option of Cuadrado down the right, Colombia have finally been getting the best out of Radamel Falcao Garcia.