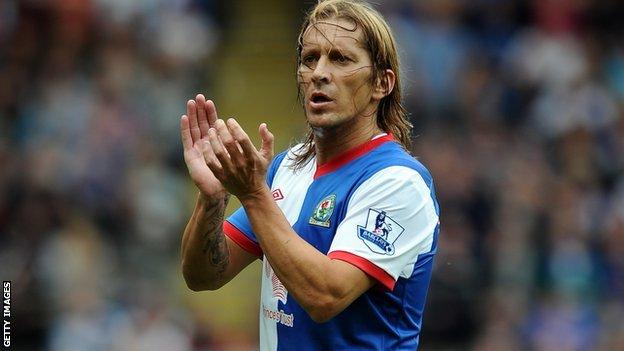 Rovers entertain fellow strugglers Huddersfield on Tuesday in 20th position, only one point above the Championship drop zone.

Full-back Salgado, who also played for Real Madrid and Spain, said he feared the impact of falling into League One.

Blackburn are due £32m over the next three seasons in parachute payments, but that represents a considerable cut from the revenues they earned while in the Premier League.

From Real Madrid to Blackburn

Awarded a match in his honour when he left Real.

Made 73 appearances for Blackburn after signing on a free transfer.

Rovers have also spent heavily this season, signing 21 players, including £8m on Jordan Rhodes from Huddersfield and £3m on Leon Best from Newcastle. The club are also paying some of their top earners more than £30,000 a week.

Salgado, 37, told BBC Sport: "The summer is a crucial time to make a lot of decisions and turn things around.

"The most important thing right now is they stay up. It is the only chance to keep the club in good condition.

"After staying up I want someone making sense for the first time in a long time and getting Blackburn Rovers back to where they belong."

Salgado, who retired last summer, was brought to Ewood Park by Sam Allardyce from Real Madrid in August 2009 and made his last appearance for the club in December 2011.

He believes an appearance-based clause, which would have entitled him to an extra year on his contract, resulted in him sitting out the rest of the 2011-12 campaign.

The two-times Champions League winner, said: "I didn't understand. I said if the next year was a problem I didn't care. It was about playing that season.

"What I never understood was the owners. They used to call me every week, every day.

"Suddenly not even a call from them to try to explain the situation. I think I deserved something different.

"It is even tougher to see the things happening there that are really strange. Crazy things."