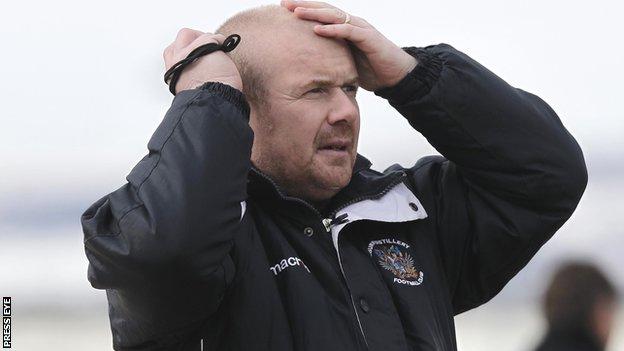 Lisburn Distillery boss Tim McCann has criticised the attitude of his players ahead of the basement club's league game at home to Ballymena United.

The Whites were crushed 7-0 by Glenavon on Saturday and lie five points behind Donegal Celtic with three matches left.

"We were atrocious at Glenavon and I'm getting nothing out of the players - I feel helpless standing there," he said.

"We have to regroup and I'll try my best to get the players motivated, but Alex Ferguson couldn't manage here."

Joel Taggart and Chris Morgan will be on commentary as relegation threatened Lisburn Distillery meet Ballymena Utd at New Grosvenor.

There are updates from the other five Premiership game and Dundela v Ards in the Championship.

He added: "We put a motivational DVD together about what it means to play for Lisburn Distillery, but I might as well talk to the wall.

"I told them before the Glenavon game that if they wanted to stay up they needed to win the game - it goes in one ear and out the other."

"I just thought we were not at the game from start to finish and I feel sorry for the Lisburn Distillery fans."

Distillery's task is made harder by the absence of Owain Beggs, Ryan McCann and Steven Gordon through suspension, while a ban rules out Ballymena forward Gary Thompson.

The Whites will be relegated if they fail to win and Donegal Celtic beat Dungannon Swifts at Suffolk Road.

Donegal Celtic are boosted by the return of Pat McShane, Paul Bradley and Stephen O'Neill from bans.

Cliftonville were crowned champions on Saturday and the Reds are back in action on Tuesday night against a Glentoran side missing banned pair Jay Magee and Stephen McAlorum.

A ban also rules out Coleraine midfielder Michael Hegarty for the Showgrounds game against Linfield.

There is also a Mid-Ulster derby with Glenavon taking on the Ports at Mourneview Park.