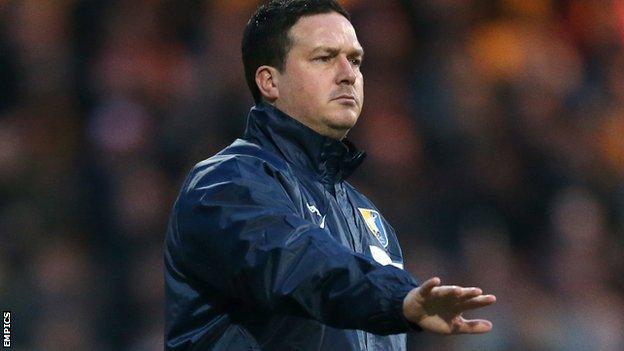 Mansfield Town boss Paul Cox says his side needs to calm down mentally if they are to win automatic promotion.

The Stags could have gone up on Saturday if they had won at Braintee and Kidderminster had lost, but Town were beaten and Harriers beat Wrexham.

But wins at Hereford on Tuesday and against Wrexham on Saturday will seal promotion and the title for Mansfield.

"The players have to forget about everything and where they are," Cox told BBC Nottingham.

"We have to be mentally tough now - there are two big games ahead of us now and that should be their focus.

"But you can't stop human beings from thinking - as much as you try to ease their minds and calm them down psychologically, they know what prize they are after and the things that come with it."

"We put on a tremendous run of results to get here, and we need to get that mindset back."

The Stags have dropped to second, one point below Kidderminster, but have a game in hand over the leaders.

Newport still have a mathematical chance of winning the title as well, following a 2-0 win over Alfreton.

Cox said he will select players for their fighting qualities as the Stags look to get their title chase back on track at Hereford on Tuesday.

"I'll see who is fit, and more importantly who is ready for a scrap," Cox said.

"I'm not going to panic and make stupid decisions now."

Stags defender John Dempster said the disappointment at Braintree would serve to spur the side on this week.

"It is something that we will use as motivation," Dempster said.

"When we have been beaten in the past we have responded well and won the next game. If we do that on Tuesday night we will be fine."