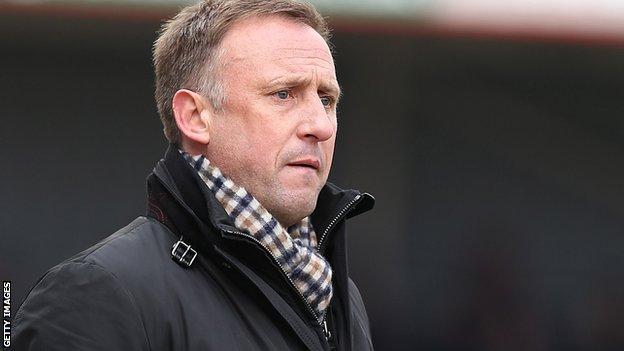 Cheltenham manager Mark Yates believes the attitude of his players going into the final two games will determine whether they are promoted.

"We have to turn up with the right attitude," Yates told BBC Radio Gloucestershire.

"I'm not saying the attitude hasn't been there but with two games to go if we do that we've got a chance."

After finishing sixth in League Two last season the Whaddon Road side reached the play-off final but were beaten 2-0 by Crewe.

Having won five of their last nine games, Cheltenham are in the race to hunt down third-placed Burton but Rotherham and Northampton, who are directly below the Robins, both have a game in hand.

Following the win over the league leaders at the weekend, Yates believes the squad is ready for the last two fixtures.

"I've looked the boys in the eye after the game and they've assured me the performance is going to be the same," he added.

"We do things as a collective here; we lose together we win together and everything was spot on.

"We've had a tough week, a bit of soul searching and hopefully we can go and do something next week and take it to the last game of the season."

The club have also announced they will pay for all of the supporter coaches that are going to Exeter on Tuesday night.