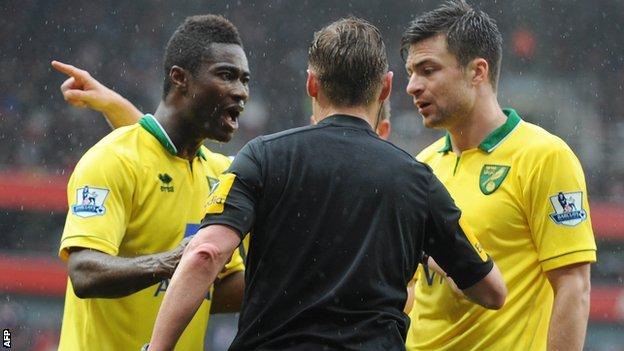 Norwich City midfielder Alex Tettey has said his side need to recover from the frustration of a "shocking" refereeing decision against Arsenal.

after equalising with an 85th-minute penalty, awarded by assistant referee Richard West.

"The ref is there. He saw everything. And the linesman, who is far away, he saw it through eight players," Tettey told BBC Radio Norfolk.

"For me that's a shocking decision. I couldn't believe it."

The result means Norwich remain four points above the relegation zone, with bottom side Reading visiting Carrow Road this weekend.

It looked like the Canaries might take three points from Emirates Stadium when Michael Turner headed them in front.

It was a lead Chris Hughton's side held for half an hour before Mikel Arteta's spot-kick inspired Arsenal to a dramatic late comeback, which was completed by Olivier Giroud and Lukas Podolski.

But Norwich were furious that West awarded the penalty for Kei Kamara's tug on Giroud and they also believed the hosts' third should have been ruled out for offside.

"To come to Arsenal and do well as a team, be 1-0 up until the 80th minute and get this decision, it's really tough for the lads to take in," said 27-year-old Norwegian Tettey.

"At the moment everybody is down, including myself.

"We need a few days to put this game away and then turn that energy and frustration into something good on Saturday."