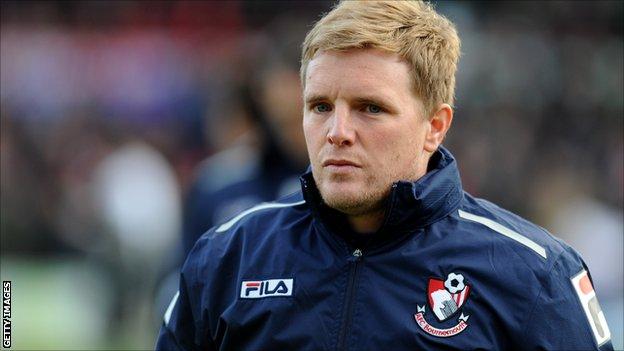 Bournemouth manager Eddie Howe has hailed their remarkable run which has taken them to the verge of promotion.

The Cherries are second in League One, two points behind leaders Doncaster with two games remaining.

Brentford are two points behind Bournemouth with a game in hand while Sheffield United can also catch them.

"It has been a remarkable run," Howe told BBC Late Kick Off South. "I didn't foresee this happening really. The players deserve all the credit."

Howe, who replaced Paul Groves in October, took over a side in the relegation zone but a remarkable turnaround sees them on the verge of winning promotion to the second tier of English football for the first time since 1987.

And Howe has paid tribute to his squad for their work ethic and spirit over the past six months.

"All we've done is bring the team together," he said. "We have our plan of how we want the game to be played and try an implement that on the training pitch so the players have been excellent in taking ideas on board."

The last manager to lead the Cherries into the second tier was current QPR boss Harry Redknapp, and Howe says if he can keep his squad fit he believes they will win promotion.

"It would mean everything to me personally but more importantly to the town it would be a historic achievement," he said.

"It would rival Harry Redknapp's side that he took up and we've got two massive games to come."

When asked if he thought they would do it he replied: "I think so. Looking at our team and our squad it is very competitive and we are looking very strong if we can keep everyone fit."

Their cause has been helped by striker Brett Pitman, who now has eight goals from his last seven games and 18 in total this season.

"He is capable of scoring goals from any position and is a big player for us but the team are creating chances for him," added Howe.