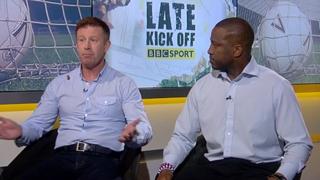 Wildes, who took over in November at Vale Park, regularly interacts with Vale fans via Twitter and his approach to communication with supporters was highlighted on Sunday's BBC Late Kick Off Midlands.

Port Vale are on the verge of promotion back to League One and face Northampton at Vale Park on Saturday.

BBC Late Kick Off Midlands is available on the BBC iPlayer and returns at 23:25 BST on Sunday on BBC One.