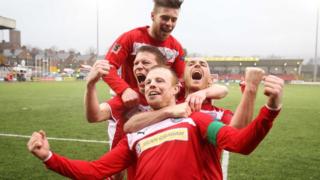 Radio Ulster conveys the excitement and drama as Cliftonville beat Linfield 3-2 to secure their first Irish League championship since 1998.

Cliftonville can complete their first ever domestic double by beating Glentoran in the Irish Cup final on 4 May.