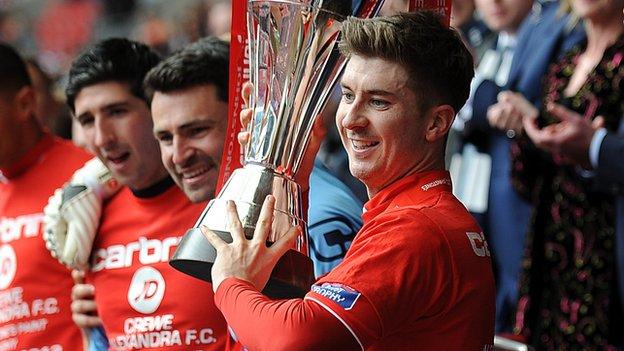 Crewe Alexandra's Johnstone's Paint Trophy-winning captain Luke Murphy says he is "ready" to step up to a higher level after being voted the League One club's player of the year.

The 23-year-old scored the Alex's first goal in their 2-0 Wembley win over Southend a week ago and has been linked with a move to Aston Villa.

"I'd love that to be with Crewe. But, if it's not at Crewe, that's football."

Crewe's second Wembley triumph in less than 11 months has been the high-point of a season in which Steve Davis's side have established themselves in League One, and even at one time looking like potential play-off candidates

But Murphy admits that, following last season's promotion from League Two, there was concern at the club as to how they would manage without two of the stars of that team who earned summer moves to the Premier League, £3m Manchester United-bound striker Nick Powell and midfielder Ashley Westwood, who went to Villa.

"We lost Nick and Westy and people feared the worst," said Murphy. "But we've had another good season and come a long way in a short period of time.

"Consistency is the key. You have to keep doing it and proving you're good enough for this league."

Murphy has caught the eye with nine goals this season, most recently his neatly-taken opener at Wembley last Sunday, watched by Villa boss Paul Lambert.

"It could have been more," he added. "As I've hit the bar four times and missed a penalty."

And it is no surprise that Murphy has been tipped to become the next prize asset to leave Gresty Road for a club in a higher division.

But the Alsager-born Crewe academy product is happy for now to bask in the honour of following the line of previous player of the year winners at the Alex.

"I'm delighted to pick up the award, especially when you look back at the names of the previous winners and at what they've gone on to achieve," he added.

"If I did go I would never forget what they've done for me here and they'd always have a place in my heart."