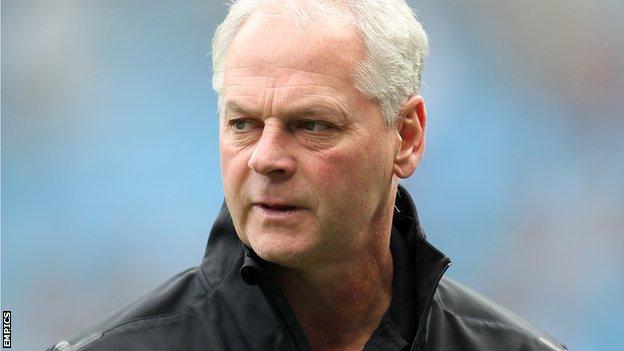 Swindon boss Kevin MacDonald has said his "studious" nature in the dugout does not signal a lack of passion.

The former Aston Villa coach has been criticised by some fans for his subdued behaviour during games.

And with their League One play-off hopes fading after three straight defeats, MacDonald has been forced to defend his character.

"They obviously don't understand the nature of me as a football coach," he told BBC Wiltshire.

"I'm quite studious about things and one of the few things I've never been described as is having a lack of passion for football matches.

Do they want me to be running up and down the touchline jumping for joy? No, because I'm paid to make decisions

"Just because people run up and down the touchline jumping and shouting for joy doesn't mean to say they actually have that passion."

Macdonald took over as Swindon manager in February following the departure of Paolo Di Canio.

The Italian was a popular figure at the County Ground, having led the club to the League Two title last season, and became well known for his animated behaviour on the sidelines - a characteristic he has continued in his new role at Sunderland.

MacDonald has kept Swindon in play-off contention but after going five games without a victory, they have dropped from second place to sixth - one point above Walsall and Leyton Orient.

"I know the supporters are desperate for the club to get into at least the play-offs and they'd love for us to get in the Championship," the Scotsman added.

"I don't know what they actually want. Do they want me to be running up and down the touchline jumping for joy? No, because I'm paid to make decisions when the game is going on.

"If anyone wants to come and talk to me then we can sit down for five or 10 minutes and decide what power is all about. I can talk to them for hours on end about football, and for me that is passion about football."