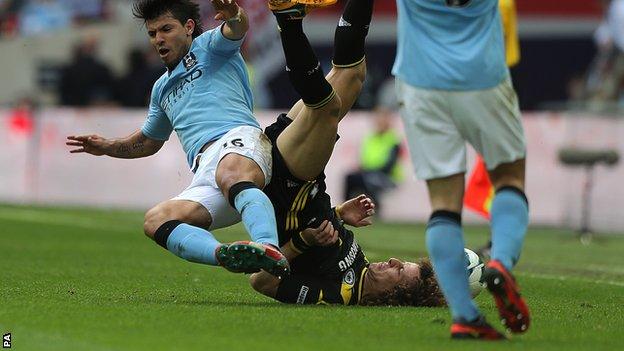 Chelsea were awarded a free-kick after the tackle nine minutes from time but Aguero was not shown a card.

After the game Brazilian Luiz said Aguero should admit that he made a bad challenge.

Aguero tweeted on Tuesday: "I've contacted David Luiz and apologised for what happened during the match."

He added: "It was an impulse reaction that shouldn't have happened."

In response, Luiz tweeted: "Thank you...for a demonstration of character. We get to know great men and athletes this way."

The Football Association said on Monday that the 24-year-old Argentina striker will not be charged retrospectively for the two-footed tackle in City's 2-1 victory.

It followed confirmation referee Chris Foy saw at least part of the incident and acted on it during the match.