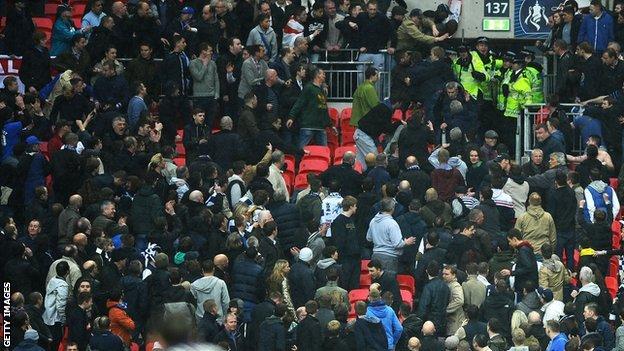 Fourteen arrests were made during the game at Wembley.

"We have pledged to offer all the help and assistance we can during the course of the investigations," said Ambler.

"At this stage, we are still awaiting details of the arrests that have already been made and understand that the police will want to identify others.

"Similarly, they will seek to discover what caused the disorder to occur and we are grateful for all the correspondence we have received from Lions fans who were as appalled as we were by what went on."

We understand that there are now bridges to be rebuilt

The violence during the game against Wigan took place in the Millwall end, with the Championship club having taken about 32,000 fans to Wembley.

Some fans were seen to be bloodied, while some younger spectators were left in tears by the events.

"The actions of a minority on Saturday spoiled what should have been an exciting day for 32,000 of our supporters who came out to cheer their team at Wembley," said Ambler.

"Furthermore, the reputation of our club, which over the last few years has been steadily and painstakingly rebuilt, has been severely damaged once again.

"We understand that there are now bridges to be rebuilt, and if there are lessons to be learned from the weekend I'm sure all parties will be keen to take them on board and ensure that those unsavoury scenes are not repeated."

Following the game on Saturday, Horne said: "The FA deplore the scenes which have taken place, which are unacceptable. Everything will be done to take action against those involved."