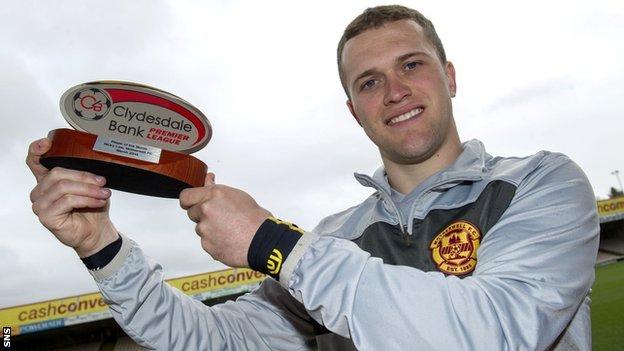 Scottish Premier League player of the month Nicky Law once before turned down a contract with manager Stuart McCall and is loathe to do so again.

That is despite the 25-year-old Motherwell midfielder being linked with a move to Rangers when his contract expires in the summer.

"I was at Bradford when he was there and I had the choice to stay," he said.

"The hardest thing I've had to do in my career was ringing the manager to tell him I was going to sign for Rotherham."

With after an undefeated March, Law picked up the Clydesdale Bank's top player award.

At the end of the season, I will look at my options and I certainly haven't ruled out staying

But, despite their fine run leading Well to second place in the table, the Englishman is being linked with a move down the leagues to Third Division champions Rangers after Ally McCoist named him as a signing target.

"There has been no contact," said Law. "I saw what their manager said, but that was it, a link with a big club.

"I made the point at the time that I had nine big games to go and now we have five.

"What I will concentrate on is getting Motherwell to stay in second place and, at the end of the season, I will look at my options then and I certainly haven't ruled out staying either.

"I will have a good chat with the manager and I will certainly think about staying."

Law worked under McCall at Sheffield United and on loan at Bradford City and rejected the chance to make the move to Valley Parade permanent.

"It would certainly be as difficult to do that again because we have a really close working relationship," said the midfielder who has scored six goals this season.

"He has been such a huge help to me and helped my game on again in the two years I have been there.

"So he is the biggest thing I will be thinking about at the end of the season."