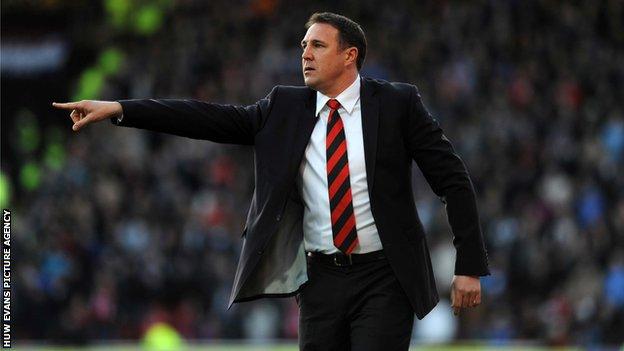 Manager Malky Mackay says Cardiff have put the "tough times" behind them as they stand on the verge of Premier League promotion.

at Cardiff City Stadium on Tuesday evening needing a point to be promoted.

"I have read plenty about the history and the ups and down attached to this football club," said Mackay.

"There have been a lot of tough times at the club and a lot of people have supported and worked for the club."

Cardiff were relegated to the old Division Three in 2001 and have endured two changes of ownership, debt, financial difficulties and winding up orders, but now stand on the verge of promotion to the Premier League for the first time in their history.

After years of financial instability, Cardiff were on the brink of administration before owner Vincent Tan's takeover as part of a Malaysian consortium.

The club continues to struggle financially, recording losses of £13.6m in the year up to the end of May 2012, with an overall recorded debt of £83.1m.

The accounts also show that the debt to Langston, the company represented by ex-City owner Sam Hammam, is put at £19.2m, with a one-off payment of £5m due if City reach the Premier League while the debt is outstanding.

But now Cardiff City stand on the verge of promotion to the richest and biggest football league in the world.

Mackay added: "The backroom staff and the ground staff have been through some dreadful times here.

"They are due some nice times and the chance to have a smile on their face and that is something that would really please me.

"For the last two years, I have seen the hours they put in and the work they do and sometimes the flak they have had to take.

Cardiff have led the promotion charge since November and Mackay admits that he understands the expectation and hype surrounding their bid to return to English football's top flight for the first time since 1962.

But the Bluebirds boss refuses to get carried away and has warned his players to stay focused on the task in hand against the Addicks.

"When it comes down to one point it's nearly real," said Mackay.

"We just have to keep on doing what we have been doing.

"It's been on our hands for a few weeks and we have kept winning games and it means it doesn't matter what other teams do.

"We will just concentrate on what is straight in front or our face."