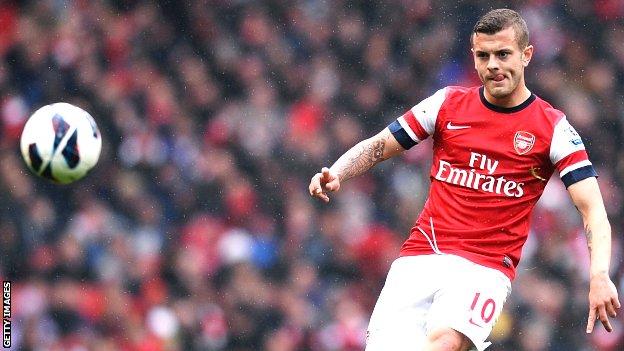 Wilshere, 21, was in action for the first time since damaging an ankle in on 3 March.

"I rushed Jack back a bit. He was not completely ready," said Wenger, whose team host Everton on Tuesday.

"I will get advice from the medical department and how he feels as well and use my experience."

The could see Wenger opt against starting Wilshere against Everton.

Wilshere has made 27 appearances this season having missed the entire 2011-12 campaign with an injury to his other ankle.

"How careful have I to be? To listen well to the medical advice and that is what I have to do, use him when everything is all right and listen to him as well, how he feels," said Wenger.

"Jack has been out for six weeks, so maybe it was a bit too rushed what I did. He practices with me since he was 16, so I know quite well how his body responds to things."

Wilshere was substituted after 59 minutes of the 3-1 win against Norwich and acknowledged he is yet to return to full match fitness.

"I know it was only six weeks, but you still lose your match sharpness and it takes a few games to come," said the England international.

"It was frustrating, because I was flying just before I got injured in March. I felt good, confident, and then picked up another injury.

"Things then drag a little and you lose your sharpness, but this time it wasn't anything like as long as the one before, so hopefully this time I can get it back more quickly.

"I needed that game on Saturday - you always need your first one out of the way. I wasn't great, I know it myself, I am better than that, but you need just to get that first game in so that your sharpness and understanding come back."

Arsenal are third in the Premier League but only four points above sixth-placed Everton as both teams bid to qualify for the Champions League.

They travel to Fulham on Saturday before hosting Manchester United on 28 April and travelling to QPR on 4 May.

The Gunners finish with a home game against Wigan on 14 May and a trip to Newcastle on 19 May, the final day of the season.