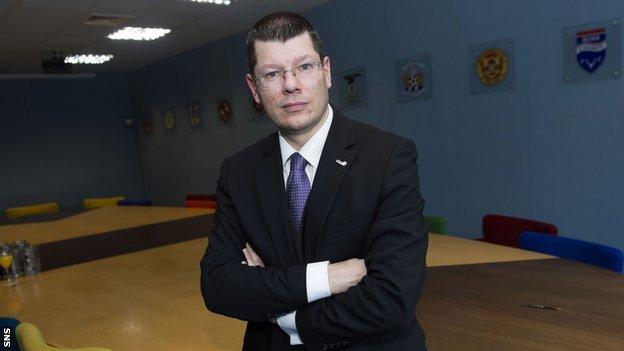 "No chief executive is in a position to drive through change against the views of his clubs," said Doncaster.

Meanwhile, Henry McLeish, whose reports into Scottish football called for major change, insists the plans are not dead.

Both men gave their views to BBC Radio Scotland's Good Morning Scotland programme on Tuesday, the day after the 10-2 vote at Hampden rejected the proposals for wide-ranging changes.

Having said in the immediate aftermath that there was "the grave danger that the voice of Scottish football is beginning to lose credibility", Scotland's former First Minister McLeish added: "I am disappointed and really frustrated. I am concerned about self-interest.

"It was a setback yesterday. I don't think it's the death knell for the deal.

"Clubs have clearly got to be interested in their own future but this is a time for bigger thinking. I would appeal to them to reconsider even at this stage.

"We have to change. I think we should be very careful about throwing out this proposal without giving it further consideration."

Doncaster disagreed with the suggestion that he was at fault for not securing the passage of the plans, although the Scottish Football League clubs may have rejected them had their vote gone ahead on Friday.

"It's not the case that I drive the clubs; it is the other way round," he said.

"The rules dictate how many clubs need to be in favour to make it happen.

"We had a number of meetings involving all 12 clubs over the past season and on two occasions we had 12 clubs unanimously in favour of the principles.

"I was instructed to try to deliver those plans. Ultimately it is for the clubs to decide what they want."

Doncaster would not comment in detail on St Mirren and Ross County's refusal to back the plans.

"My role as chief executive is to represent all 12 clubs equally," he said.

"We needed 11 votes to carry the proposals. We got 10 in favour, so there was an overwhelming majority for change that would have benefited all 42 clubs in this country, but two clubs voted against.

"You'd have to ask the clubs what their reason was for voting against.

"Going into the meeting, there was the view that one of the stumbling blocks was the rules on voting on future league structure reform.

"Halfway through the meeting a major concession was made to take the threshold down from 11-1 to 9-3 for any future change.

"The view within the room was that that major concession would achieve breakthrough.

"It was a major surprise to most people around the room when that concession wasn't deemed acceptable and the whole plan was shelved."

Describing his mood as one of "disappointment", the SPL chief executive said that "for the time being we have the status quo" but McLeish warned that was a precarious position.

"The stakes are high. Football is in a poor condition just now - attendances are fragile, finance is very limited, the product on the pitch is poor," McLeish said.

"It is a time for absolute change. Without major change the prospects for football are not good.

"I think it is premature to say the deal is dead. We need to reflect on the result yesterday and salvage some of the wreckage.

"My view is that the focus should be on the two clubs who said no, to find out in detail what their concerns were."

McLeish fears that some First Division clubs, who stood to benefit from a more generous cash distribution under the proposals, might try to form a second tier under the auspices of the SPL.

"We could get the worst of all options, an SPL2 emerging from the ashes," he warned.

"You end up with two league set-ups instead of one.

"Let's not take responsibility to the SFA. Scotland far too often wants to pass the buck. This is an SPL issue, eventually an SFL issue.

"If we don't do anything we will be sending a very powerful message to investors, to sponsors, to the government that we can't sort out our own affairs."