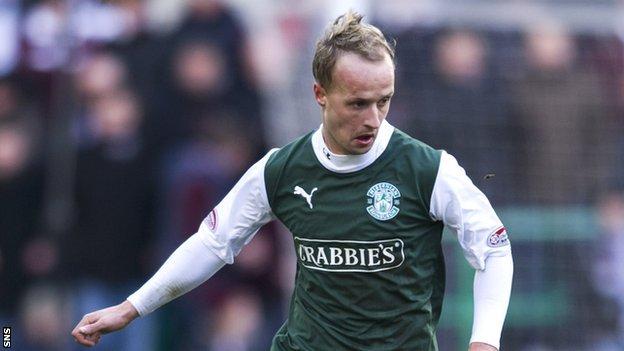 Leigh Griffiths's last game for Hibernian is likely to be the Scottish Cup final after Wolves manager Dean Saunders decided to take up the one-year option on the striker's contract.

The 22-year-old has been at Easter Road on loan from Molineux and Hibs hoped he would be a free agent in the summer.

But Saunders has been impressed with the Scotland international's 25 goals this season and wants him to return.

Pat Fenlon's men were 3-0 down but fought back to clinch a Scottish Cup final place with a 4-3 victory after extra time and will now play Celtic at Hampden on 26 May.

Griffiths moved from Dundee to Wolves in January 2011 on a two-and-a-half-year deal but after failing to break into the first team he joined Hibs on loan that August until the end of that season.

He returned to Easter Road in July on another loan deal, with the terms extended until the end of the current campaign.

In recent weeks Fenlon has said that the striker's "quality shines through all the time".

Griffiths's departure to the Championship strugglers, coupled with that of Eoin Doyle's move to Chesterfield, will leave the Easter Road manager seeking replacements.