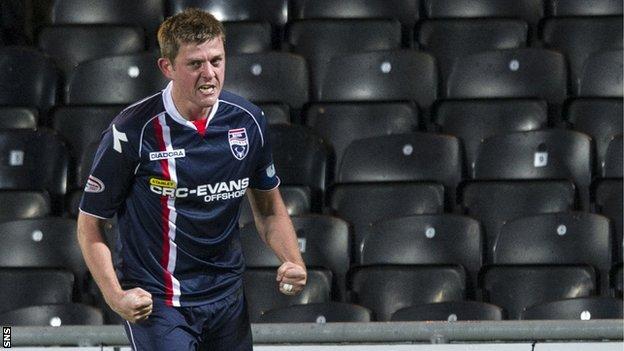 Family issues are behind Ross County captain Richard Brittain's change of mind about a summer move to St Johnstone.

The 29-year-old midfielder wants to cancel the pre-contract deal he agreed with the Perth club in January.

Brittain had been planning to join Steve Lomas' outfit after nearly five years in Dingwall.

County chairman Roy MacGregor said: "He has, for family reasons, felt that now it's not the right move."

He has family difficulties and he needs, with honesty and integrity, to go and speak to Steve Lomas and St Johnstone

However, MacGregor told BBC Scotland that County could not become involved in the issue at this stage.

"That's really a conversation for Richard and St Johnstone," he said.

"He has family difficulties and he needs, with honesty and integrity, to go and speak to Steve Lomas and St Johnstone and try to explain that and see how they feel about it.

"That's a personal issue for him. Ross County cannot be involved in that because, out of good faith, he signed a pre-contract with them in January."

County, under manager Derek Adams, are chasing an unlikely European place in their debut season in the top flight.

Seven of Brittain's eight goals this term have been scored in the Scottish Premier League, helping the Staggies, like St Johnstone, secure a place in the top six after the league split.

On securing Brittain's signature at the start of the year, Lomas described him as "a fantastic leader" who would bring "good experience to the club and great quality from dead-ball situations".

It is understood that Brittain hopes to meet St Johnstone officials to discuss his future.

Brittain's registration at the Scottish FA was not due to be transferred from County until the end of his current contract and the governing body views his decision as an unprecedented scenario.