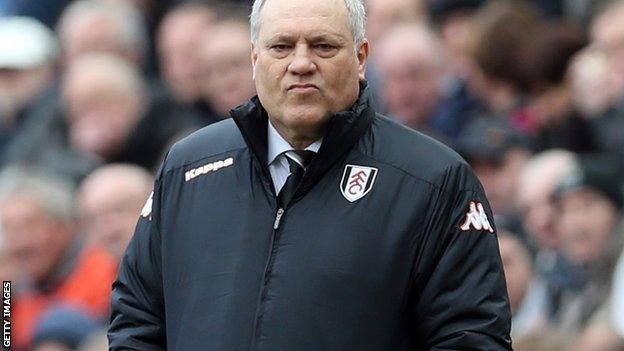 Fulham manager Martin Jol says the priority in the close season will be to strengthen his midfield.

In addition, the contracts of fellow midfielders Mahamadou Diarra, Giorgos Karagounis, Chris Baird and Simon Davies are up at the end of the season.

"Mark Schwarzer saves games for us so I would like him to stay but we are looking for a goalkeeper."

"In midfield, I think Steve Sidwell is probably the only one left of the players we had six or seven months ago. We have to do something," said Jol.

Fulham have Urby Emanuelson, Emmanuel Frimpong, Stanislav Manolev and Eyong Enoh on loan until this summer and Jol has the option to make the moves of the latter pair permanent.

"Up front, we will talk to Mladen Petric as he is on a one-year deal," added Jol, whose side are 10th in the Premier League.

"We have an option in Sascha Riether's loan [to make it permanent] and we will probably take that.

"For the rest, I don't see any problem but in midfield we can do something because there is only one or two left.

"Karagounis is also on a one-year deal so Sidwell is probably the only one who is on a long-term contract."

Jol would like goalkeeper Mark Schwarzer to extend his current deal past this summer but says he still wants to sign another keeper.

"Mark Schwarzer is for us almost a hero," said Jol. "He saves games for us so I would like him to stay but we are looking for a goalkeeper."