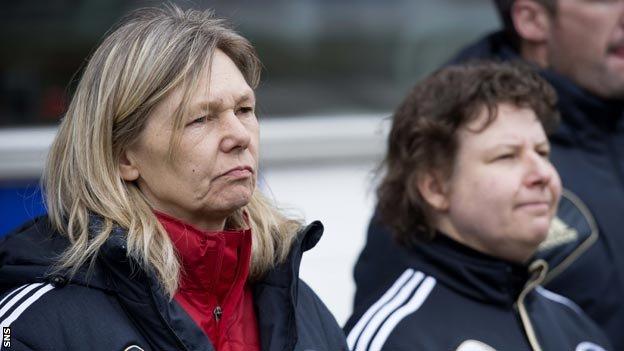 Scotland's coaching team return to their homeland after being drawn alongside Olympic bronze medallists Sweden in Group 4 for the 2015 Women's World Cup qualifying campaign.

Coach Anna Signeul and assistant Ann-Helen Grahm are both Swedes.

Signeul said: "The Sweden link stands out, but this is a very interesting group, full of teams that we have never faced in a qualifying campaign."

Poland, Bosnia-Herzegovina, Northern Ireland and the Faroes are the others.

Grahm left the Scotland set-up in 2010 and was part of the Swedish coaching team for that bronze medal run before returning as Signeul's assistant.

It will be interesting for myself and Ann-Helen to face our home nation, but more than anything it will be fantastic for the players

While Sweden are ranked sixth in the world, Signeul thought the draw could have been worse for the Scots, who were in the second pot of seeds.

"We were glad to avoid the likes of France from Pot A," she said. "But, make no mistake, Sweden are a very, very good team.

"It will be interesting for myself and Ann-Helen to face our home nation, but more than anything it will be fantastic for the players.

"It's always a positive overall experience to play in a country where women's football is one of the most popular sports, where the profile is high and you can expect to play in front of a big crowd."

Scotland have not faced any of their opponents in competitive matches but played friendlies against Sweden, Poland and Northern Ireland in 2012.

Last February, Scotland defeated the Northern Irish 5-1 in Belfast and, three months later, won 3-1 in Gdansk and were defeated 4-1 by Sweden in Kirkcaldy.

"Poland are an up and coming team with quick, skilful players and Northern Ireland are another developing nation who we can expect to give us two tough matches," added Signeul.

"Bosnia and the Faroe Islands will be a completely new experience for us."

The qualifiers will run for a year from September, with the seven group winners qualifying for the finals and the four best runners-up advancing to the play-offs in October and November 2014 ahead of the finals in Canada.