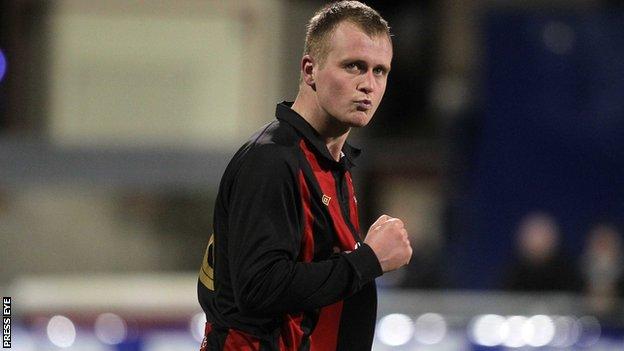 Mark Stafford headed over an early Mallards chance before Owens poked the Crues into the lead on 22 minutes.

Gary McCutcheon doubled the Crusaders advantage on 40 minutes after being played in by Eamonn McAllister.

Saturday's 2-1 win over Coleraine had confirmed the Seaview club's runners-up spot in the table but they still showed good attitude in Tuesday's clash.

Stafford did head his early chance over the crossbar but Owens struck the Crues ahead after a flick-on by McCutcheon.

The Scottish striker notched the second Crues goal five minutes before the break after fine work by the enterprising McAllister.

Steve Feeney missed a close-range Mallards chance before the break which meant that the home side remained 2-0 ahead at half-time.

The lead became 3-0 10 minutes after the restart as Snoddy set up another goal for Owens.

Substitute Sheridan pulled a goal back for the Fermanagh outfit 10 minutes later before the contest petered out.