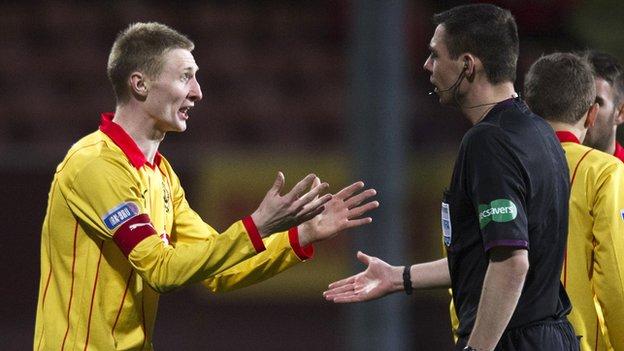 Partick Thistle have confirmed that midfielders Chris Erskine and Paul Paton will be leaving to join Dundee United in the summer.

But goalkeeper Scott Fox has been secured on a new two-year contract.

Thistle are close to clinching the Division One title and promotion to the Scottish Premier League.

However, chairman David Beattie told BBC Scotland: "I believe that Paul and Chris have signed pre-contracts with Dundee United."

The 26-year-old Erskine signed for Thistle in 2009 from junior outfit Kilbirnie Ladeside.

Paton, a 25-year-old who can play in defence or midfield, started his career with Queen's Park and switched to their Glasgow rivals in 2008.

While that pair will follow former Thistle manager Jackie McNamara to Tannadice, 25-year-old Fox, who joined Thistle from Dundee in 2010 after spells with Celtic and Queen of the South, has extended his stay at Firhill.

Ahead of Thistle's home fixture against Raith Rovers, Beattie promised to help manager Alan Archibald retain the rest of his squad in preparation for their return to the top flight.

"We have just signed Scott Fox, our goalkeeper, which is a great bit of business for us," he said.

"And we've got contract negotiations that will go on in the next couple of weeks for most of the players in our team.

"We will be looking at keeping those players and building on them.

"It is a young squad we have, it's going to be a huge experience for them to go into the SPL, they are taking a huge step up.

"I think they've got it in them, we've got two players who are playing in the Scotland Under-21 team, and the experience will be absolutely fantastic for them."

However, Beattie promised that Thistle would not put themselves into financial trouble in a bid to stay in the top flight.

"These guys will get bigger wages from us because we can afford to do so," he said.

"We will strengthen the team by bringing in some new players.

"The objective is to stay in the SPL, but I reiterate that it will not be a financial disaster if we don't."

Meanwhile, United have also confirmed the contracts with Paton and Erskine on their club website.