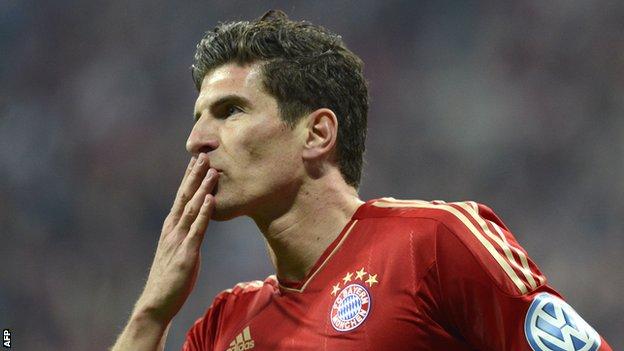 Bayern Munich remain on course to become the first German team to win a treble after thrashing Wolfsburg 6-1 to reach the domestic cup final.

When already 3-1 up, striker Mario Gomez came off the substitute's bench to score a six-minute hat-trick.

A dominant season for Bayern sees them sit 20 points clear in the Bundesliga, as well as beating Italian champions Juventus 4-0 on aggregate in the Champions League quarter-finals

Bayern will now play Stuttgart or Freiburg in Berlin on 1 June.

They already secured the Bundesliga title with a record six games to spare, and will meet Barcelona in the Champions League semi-finals.

Winger Xherdan Shaqiri was the inspiration behind the Bavarians' victory as he won the ball in the build-up to Mario Mandzukic's opener, set up Arjen Robben for the second and scored following a corner before Gomez's late arrival.

Bayern play Hannover in the league at the weekend and then host Barca in the first-leg of their last-four clash next Tuesday.