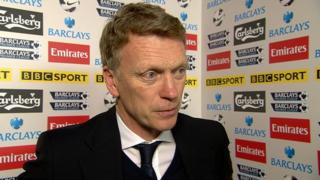 Top four will be hard for us - Moyes

Manager David Moyes admits drawing 0-0 at Arsenal has made it "harder" for his side to secure a Champions League place this season.

Moyes praises his side's performance in an end-to-end game where 19-year-old Ross Barkley had Everton's best chance with a curling right-foot attempt.

Everton are now within two points of fourth-placed Chelsea having played two games more, but Moyes says "games are running out" for his team.