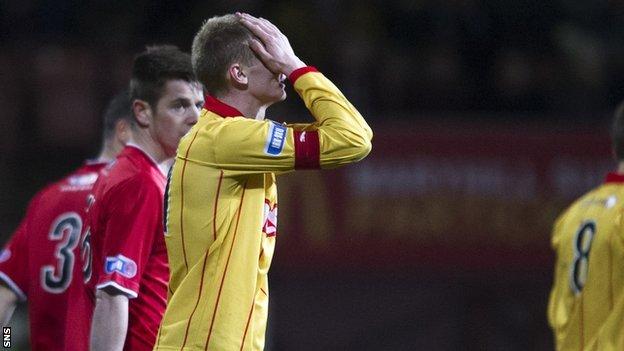 Partick Thistle missed a chance to clinch the Division One title and promotion to the top flight after being held at home by a determined Raith Rovers.

But it means that the Glasgow club need only a point from their remaining three matches to confirm their place in the Scottish Premier League next season.

The Jags will now have to wait until at least Saturday's clash visit to Falkirk to seal their triumph.

Rovers had the better of the first half after striker Greig Spence's effort from 10 yards out was expertly clawed to safety by Thistle goalkeeper Scott Fox in the third minute.

Thistle dominated in the second period and had a number of good opportunities to break the deadlock.

Chris Erskine and Stephen O'Donnell came close for the league leaders, but neither of their efforts truly troubled Rovers goalkeeper David McGurn.

The draw puts Thistle nine points ahead of second-top Morton.