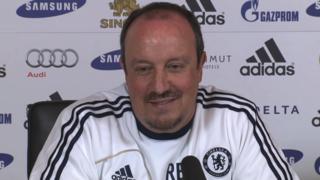 Chelsea interim manager Rafael Benitez says his squad rotation policy will continue ahead of the west London derby with Fulham.

Benitez is expected to make several changes to his team that lost to Manchester City in the FA Cup semi-final, but insists he has to "manage the squad" to keep them fresh until the end of the season.

Despite not having beaten Chelsea in 13 league meetings spanning back to 2006, Benitez says Fulham are a "very good team" now that they have established themselves in the Premier League.