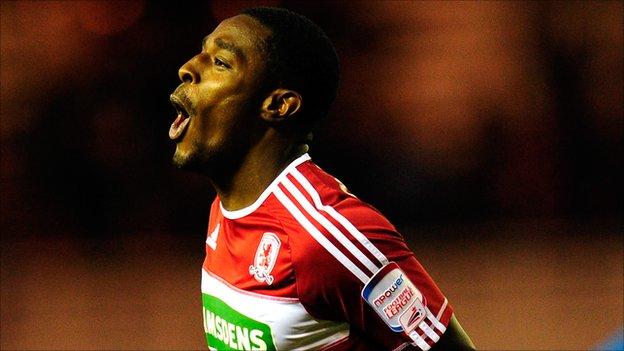 Middlesbrough manager Tony Mowbray has said fans are beginning to see the best of Mustapha Carayol at the end of a difficult first season on Teesside.

The former Bristol Rovers winger, who moved to the Riverside last summer,

"It's taken him a while to get used to the speed of the Championship, and the demands," Mowbray told BBC Tees.

"But when he's in possession and running at full-backs you get excited."

He added: "I remember sitting down with him in my office and he was really emotional at a first serious injury. For a young boy it was really hard to take."

The 23-year-old scored as Boro his fourth strike in 18 matches this term.

"He does what he was brought for, to isolate players, to get past them and get the ball in the box. and he added to that by getting the goal," Mowbray said.

Boro will likely be forced to rely on unearthing similar talents from the lower leagues in the forthcoming seasons, as the restraints of Financial Fair Play place pressure on clubs.

"Muzzy is a product of the scouting system," Mowbray continued. "We have to do business [in the summer].

"We're looking at players like Carayol, and George Friend, who come in at prices that don't hurt the football club, either salary or transfer fee.

"There will be some salary freed up to use, and there might, if we sell somebody, be money to bring people in."