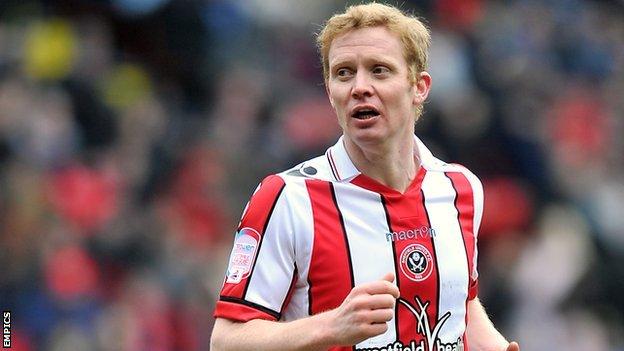 Sheffield United midfielder Barry Robson felt his side should have taken three points from their draw against promotion rivals Brentford.

The Blades were pegged back by a Bradley Wright-Phillips goal in the 89th minute when the Bees had been reduced to nine men.

Robson, 34, told BBC Radio Sheffield: "We should have kept the ball more and tried to settle down a bit.

"The madness of the game can get you and we're frustrated not to have won."

He added: "I think we deserved to win it but credit to them because they came and had a go."

Robson came off the bench to level for the hosts from the spot after Tony McMahon had missed an earlier second-half penalty.

The former Scotland international is now hoping to have a big impact as the Blades push for promotion.

"I wish I'd been on from the start but hopefully I'll be back in again now," he said.

"It was a bit of a surprise to be out of the team but that's football and I'll keep digging in and looking to put in performances.

"There's no chance that we're giving up on getting automatic promotion. The pressure is going to be on all of the teams so hopefully we can handle it best."

The Blades, who confirmed their place in the play-offs with a point on Tuesday, are currently five points behind second-placed Bournemouth with a game in hand on the Cherries.