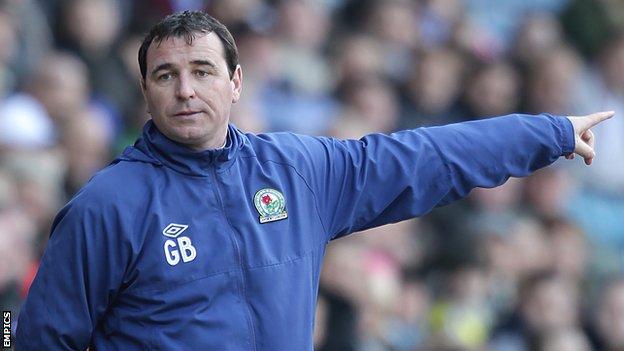 "The fans were tremendous and played their part. That's as loud as I've heard Ewood Park for a long time," Bowyer told BBC Radio Lancashire.

"We'll need that support for the last four games of the season."

Jordan Rhodes, who scored Blackburn's winner against his former club Huddersfield on Tuesday, has netted 24 of the 51 league goals Rovers have scored in the Championship this season

Average home attendances have dropped by around 8,000 from last season while Rovers were playing in the Premier League, while there has been constant discontent from a majority of fans because of the club's performance on and off the field.

A crowd of 15,317 watched Blackburn follow up their with another success, this time against one of their closest rivals near the foot of the Championship.

And, once again, it was striker Rhodes who proved the difference. The Scotland international has contributed 24 of Blackburn's 51 league goals this season and found the net again on Tuesday against

"It was a great finish," added Bowyer, who is in his second spell in temporary charge this season. "It's why the club paid the money for him.