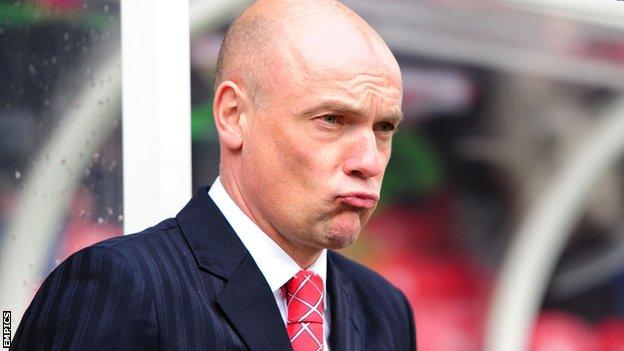 Brentford boss Uwe Rosler says his side did well to rescue a point from a "battle" at Sheffield United.

The Bees had two players sent off but a late goal secured a 2-2 draw.

He told BBC London 94.9: "I have never been involved in a football game like this. Sheffield United had all sorts of problems with us.

"They started to get us into a battle where we lost our heads. That was the only way for them to get something out of the game and we reacted at times."

In an extraordinary match at Bramall Lane, referee Keith Stroud booked eight players before half-time and then gave Brentford's Tony Craig and Clayton Donaldson and United's Harry Maguire their marching orders after the break.

The linesman told me he saw Tony punching the player in the face. We will definitely appeal on that and we have a very good chance, on the footage, that justice will be done

Defender Craig was dismissed for violent conduct following an altercation with Dave Kitson, while striker Donaldson was sent off for two bookable offences - the first of which was diving.

"In the first half we picked up some easy yellow cards," Rosler added.

"The first yellow card for Clayton Donaldson [should have been] a penalty. There was contact.

"At half-time we warned the players. We said 'just play football, let the football talk. They can't cope with you'.

"We should still have had a bit more composure by knowing that the referee was influenced by the crowd."

Rosler says Brentford will appeal against Craig's sending off, with the 27-year-old currently set to miss the last two games of the season through suspension, plus the first-leg of a play-off semi-final should the Bees miss out on automatic promotion.

"In the game I didn't see it but I have now on a DVD," the German said. "Tony got fouled and Kitson wrestled him down. Tony had his arm up but there was no movement.

"The linesman told me he saw Tony Craig punching the player in the face.

"We will definitely appeal on that and we have a very good chance, on the footage, that justice will be done."

"All credit to the nine guys and how they fought and how we came back," Rosler added. "It is another testament to how far we have come."